Voting shortlists for the 2021 3D Printing Industry Awards are now open. Who do you think should receive top honors this year? Have your say now.

Researchers at the University of Arizona’s College of Engineering have used 3D printing to create a smart health monitoring device that’s able to operate continuously without ever having to be manually recharged.

Dubbed ‘bio-symbiotic’ by its creators, the tracker harvests electricity via a power casting unit, that wirelessly charges its integrated antenna. In turn, the device uses this power to capture the biosignals and energy generated by wearers as they work out, in a reciprocal process that allows it to function for unprecedented periods.

Using 3D printing, the team has also been able to customize their patch-like fitness monitor so that it stays attached to users during exercise, while its sensors monitor the wearers’ biosignals with such a high level of accuracy, that they can identify the deformation within each muscle and calculate an adopter’s workout intensity.

“There’s nothing like this out there,” said Philipp Gutruf, an author on the paper and Assistant Professor at the university. “We’ve introduced a completely new concept of tailoring a device directly to a person, and using wireless power casting to allow the device to operate 24/7, without ever needing to recharge.” 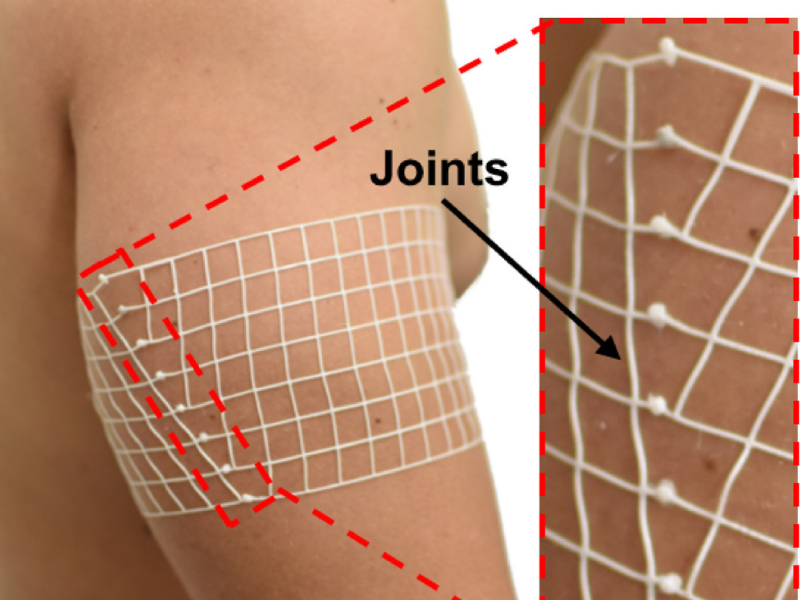 The engineers’ 3D printed device can be customized to monitor different muscles around the human body. Photo via the Science Advances journal.

Wearable electronics aren’t just useful workout tools for gym goers, but when worn constantly, they can gather sufficient data to identify early warning signs of deadly conditions such as cardiac arrhythmia. What’s more, AI advances are increasingly enabling vast quantities of this biodata to be processed at pace, allowing any potential trends and diagnoses to be found or made more quickly than ever before.

However, despite recent analytic progress, the Arizona team say that fitness hardware has found it difficult to keep up, and they accuse current devices of “lacking sensing functionality,” as well as failing to provide “uninterrupted data streams.”

To get around these shortcomings, the researchers have developed a wearable that uses a wireless power transfer technique known as ‘far-field’ energy harnessing, to convert radio frequency (RF) signals into a source of power, in a way that enables it to capture data continuously with precision, that they say is “nearly imperceptible the wearer.”

The researchers’ ‘far-field’ sensor set up. Photo via the Science Advances journal.

At the core of the team’s health tracker is an FDM 3D printed ‘mesh,’ which can be tailored to stick to and operate on different areas of a wearer’s body, without needing adhesives. To lend their device sensing functionality, the team has embedded it with tiny sensory electronics which rest upon flexible nodes, and are joined up via stretchable serpentine interconnects.

Theoretically, these operate by communicating with a power casting system via antenna, which fuels the device’s active-harvesting electronics, and fills the energy storage cells that activate its sensors. Any data collected during a workout can then be relayed to computers via the tracker’s integrated bluetooth low-energy (BLE) on-a-chip system, and analyzed for potential fitness-boosting trends.

Given that the device’s power casting system can be placed several meters away, it’s potentially ideal for home-use, something that can’t be said for many existing ‘far-field’ systems. What’s more, the team’s wearable can be personalized to collect data from specific limbs and joints such as the shoulder or bicep, enabling it to do so with a level of accuracy that’s well beyond most normal trackers.

“If you want to measure the way your bicep deforms during exercise, we can place a sensor in the devices that can accomplish that,” explains the paper’s lead author Tucker Stuart. “Because of the way we fabricate the device and attach it to the body, we’re able to use it to gather data a traditional, wrist-mounted wearable device wouldn’t be able to collect.”

To put their bio-symbiotic design into practise, the researchers initially 3D printed a test model from a Ninjatek elastomer, before slotting its electronics into place by hand. Using an Xbox Kinect camera, the team found that they were able to scale their prototype to fit snugly onto a test subject’s muscles, through creating an athlete-specific 3D model, and dividing it up into ‘physiological landmarks.’

For testing purposes, the engineers chose to base their device on the upper arm and lower leg areas of their model, before attaching it to the relevant volunteer, who subjected it to running, jumping and rowing, as well as push-up experiments.

During these tests, the Arizona team say their device demonstrated a “stable biointerface” while yielding “high-fidelity data streams,” and by deploying multiple units at the same time, they were able to monitor various areas simultaneously, including aspects such as temperature changes and muscle deformation, in a way that outstrips the performance of “current gold-standard devices.”

Overall, although their device was only tested for 48 hours at a time, the engineers believe that this was sufficient to demonstrate the viability of their approach. In future, by incorporating microfluidic designs into their tracker, the engineers say that it could have significant clinical applications, as a means of monitoring patients’ vitals for longer, and providing doctors with enhanced diagnostic data. 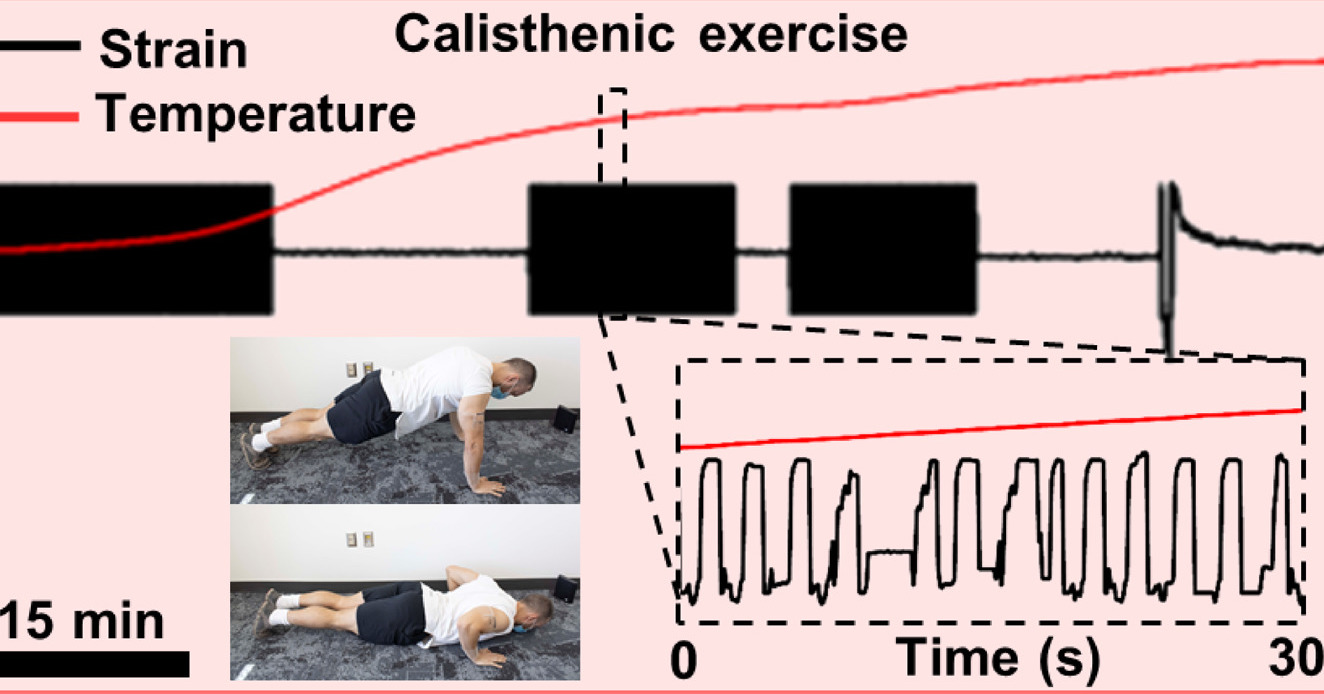 A graph depicting some of the results provided by the team’s athletic testing program. Images via the Science Advances journal.

Thanks to the ever-growing accessibility and flexibility of FDM 3D printing, the technology has become a widely-adopted means of creating low-cost experimental sensors. Much like the Arizona team’s device, researchers at Jeonbuk National University have also 3D printed piezoelectric sensors that don’t require external power to function, and are powered by human movement.

A team at Sungkyunkwan University, meanwhile, have 3D printed wearable biosensors of their own, which are specifically designed to address personalized monitoring applications. Composed of a flexible silicone elastomer and sugar-based scaffold, the researchers’ devices can be utilized as diagnostic tools, for capturing users’ changing body strain signals.

The researchers’ findings are detailed in their paper titled “Biosymbiotic, personalized, and digitally manufactured wireless devices for indefinite collection of high-fidelity biosignals.”