Scientists at Stanford University and the University of North Carolina at Chapel Hill (UNC) have produced a 3D printed vaccine patch which they claim provides greater protection than a typical vaccine shot.

Applied directly to the skin, the microneedle patch reportedly delivered an immune response 10 times greater than a vaccine delivered into an arm muscle via a needle jab. The microneedle patch also has other advantages, including easy and painless delivery, and the potential to be self-administered.

“In developing this technology, we hope to set the foundation for even more rapid global development of vaccines, at lower doses, in a pain- and anxiety-free manner,” said Joseph DeSimone, the lead author of the study and Co-founder of 3D printer OEM Carbon. “One of the biggest lessons we’ve learned during the pandemic is that innovation in science and technology can make or break a global response.

“THANKFULLY WE HAVE BIOTECH AND HEALTH CARE WORKERS PUSHING THE ENVELOPE FOR US ALL.” 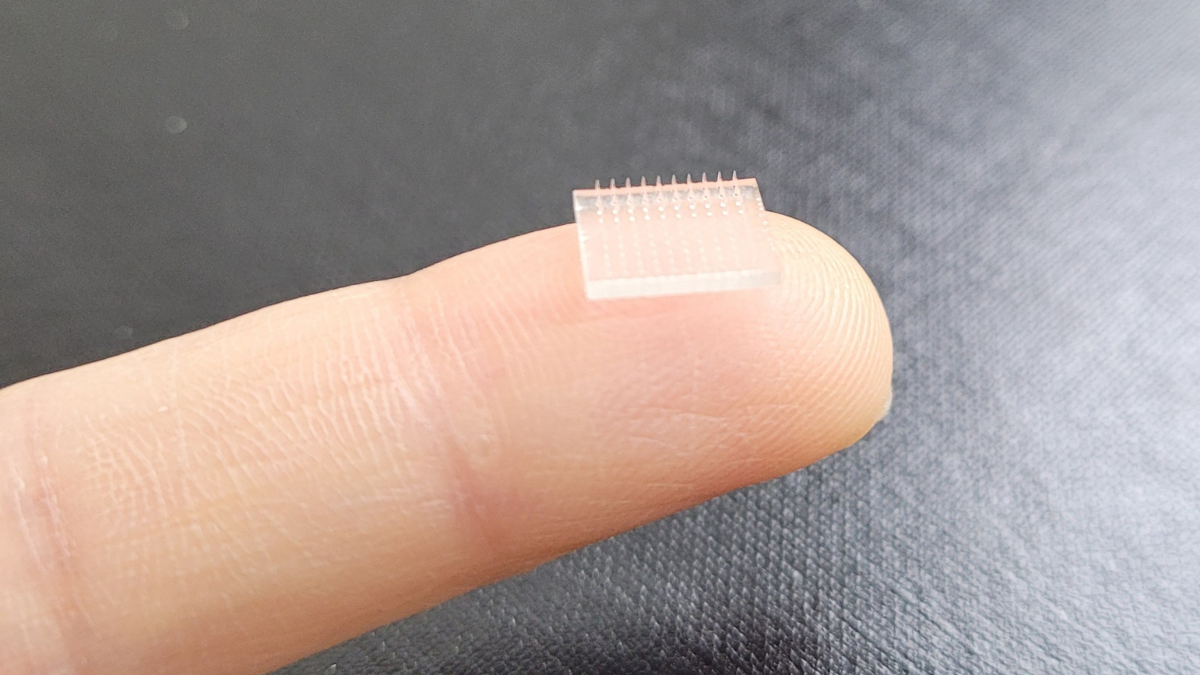 Scientists at Stanford University and UNC use 3D printing to create a microneedle vaccine patch. Photo via UNC.

Vaccination has long been an essential public health measure to help prevent infectious diseases, and over the last year has been vital in the effort to protect populations across the globe against Covid-19. While vaccines are typically administered via a hypodermic needle shot, microneedle patches have been studied and developed for decades.

3D printing technology is being increasingly utilized to improve the customization and accuracy of microneedle patches, which provide a non-invasive and painless approach to vaccination. Able to be self-administered, the patches provide a more attractive alternative to those with a phobia of needles while reducing the need for trained personnel to administer vaccines.

The patches are typically formed of tiny 3D printed microneedles arranged on a polymer patch, and are applied directly to the skin. The vaccine then targets the immune cells present in the skin and generates an antigen-specific antibody response.

Microneedle patches also deliver logistical advantages. Vaccines delivered via a needle typically require cold storage in fridges or freezers, and usually require a trip to a clinic, hospital or vaccination center. In contrast, vaccine-coated microneedle patches can be shipped anywhere in the world without special handling, and as they can be self-administered, would mean fewer trips to hospitals or clinics for patients.

The scientists believe that such benefits could potentially encourage higher vaccination rates in the future. 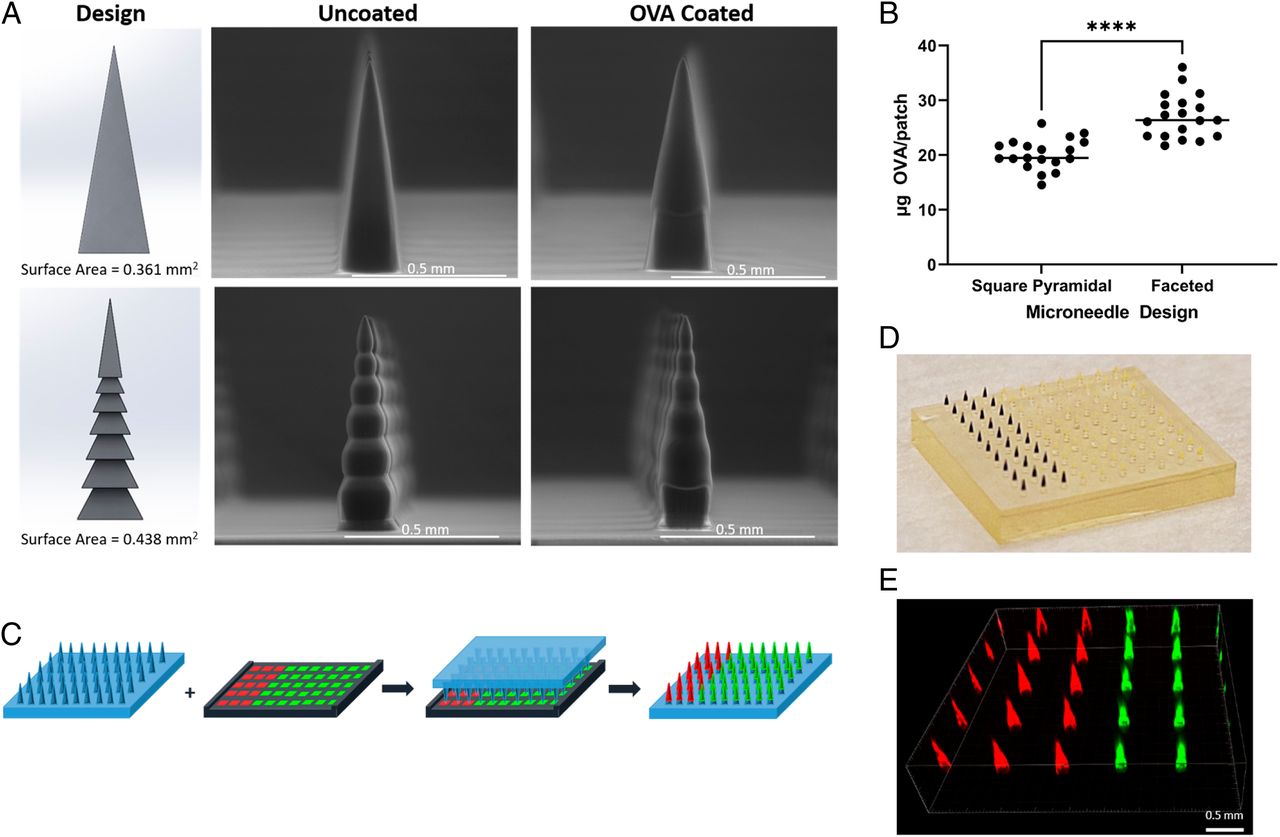 The majority of microneedle vaccines are created through molding techniques, however such methods can lack in versatility and lead to reduced needle sharpness during replication. There have also been challenges in adapting microneedles to different vaccine types, according to Shaomin Tian, lead study author and researcher in the UNC School of Medicine’s Department of Microbiology and Immunology.

“These issues, coupled with manufacturing challenges, have arguably held back the field of microneedles for vaccine delivery,” she said. “Our approach allows us to directly 3D print the microneedles which gives us lots of design latitude for making the best microneedles from a performance and cost point-of-view.”

The microneedle patches developed by the Stanford and UNC scientists were 3D printed using a prototype 3D printer from Carbon, based on the firm’s Continuous Liquid Interface Production (CLIP) technology.

The results of the study showed that the vaccine patch generated a significant T-cell and antigen-specific antibody response that was reportedly 50 times greater than a typical injection delivered under the skin. The resulting immune response was observed to be 10 times greater than that of a vaccine delivered straight into the arm muscle.

According to the scientists, the heightened immune response could pave the way towards dose sparing, where a microneedle vaccine patch would be used to deliver a smaller dose of a particular vaccine while still triggering a similar immune response as a vaccine delivered with a needle and syringe would. Potentially, this could go some way towards better managing vaccine supply and demand, and ensuring that more people have access to vital vaccines.

Going forward, the Stanford and UNC teams will continue to formulate vaccines such as the Pfizer and Moderna Covid-19 vaccines into 3D printed microneedle patches for future testing.

More information on the study can be found in the paper titled: “Transdermal vaccination via 3D printed microneedles induces potent humoral and cellular immunity,” published in the Proceedings of the National Academy of Sciences of the United States of America (PNAS) journal. The study was co-authored by C. Caudill, J. Perry, K. lliadis, A. Tessema, B. Lee, B. Mecham, S. Tian, and J. DeSimone. 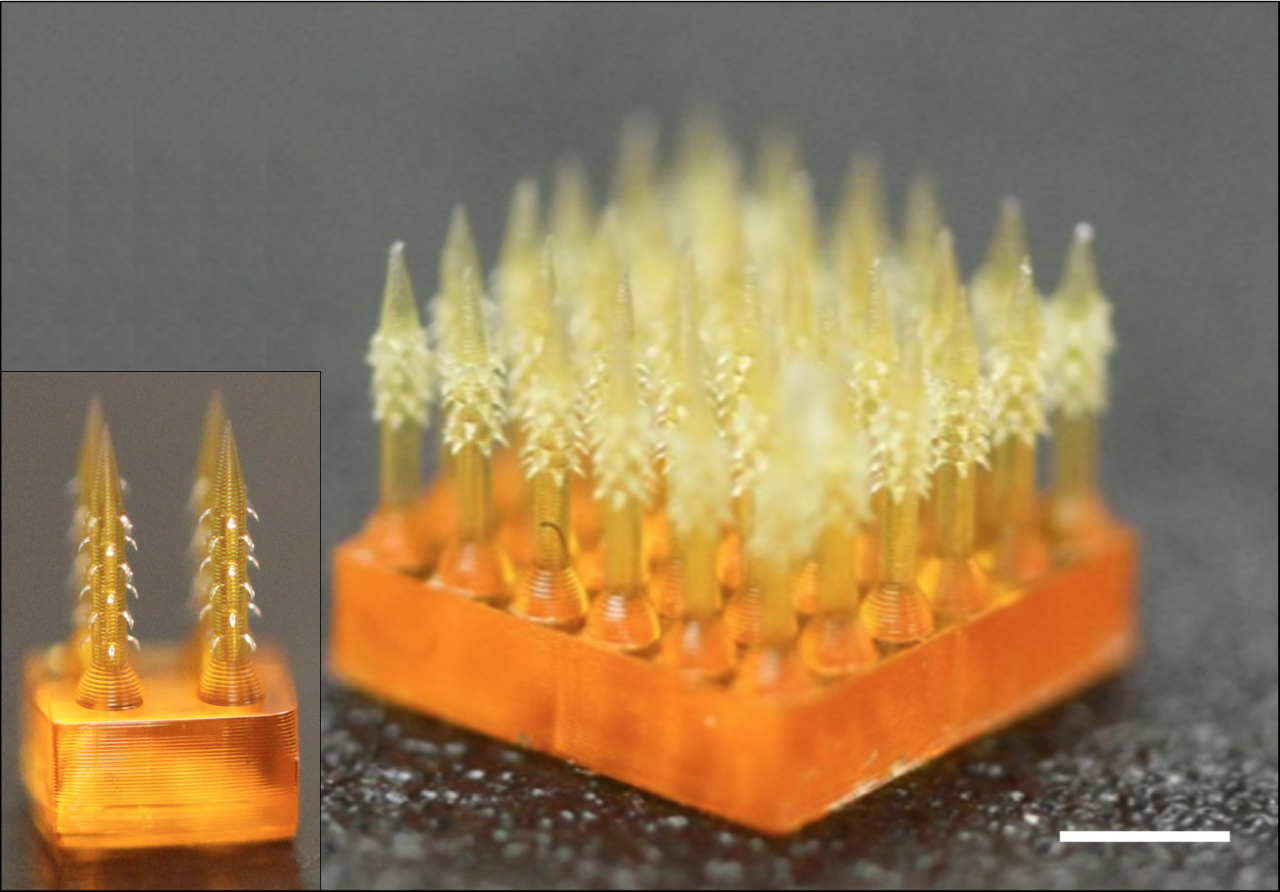 Substantial research has been undertaken in leveraging 3D printing technologies to produce microneedle patches in previous years. 3D printing allows greater customization and repeatability over traditional micromolding techniques, and enables the patches to be manufactured on-demand. This removes the need for storage space within clinics and laboratories while side-stepping the high initial tooling costs of micromolding methods.

In 2018, for instance, scientists at the University of Texas at Dallas developed a new low-cost method of making microneedle arrays using an FFF 3D printer, while earlier this year researchers from Rutgers University used a Projection micro-stereolithography technique to create 4D printed bioinspired and programmable microneedles that enhance tissue adhesion.

Elsewhere, scientists from Arizona State University and the University of Southern California teamed up to produce 3D printed microneedle patches inspired by limpets, which could be used to deliver drugs painlessly to patients in the future.

Most recently, a novel device that combines 3D printing, microneedles, and microelectromechanical systems (MEMS) was produced by the University of Kent and the University of Strathclyde, which could be leveraged to provide controllable transdermal drug delivery.