Engineers at Washington State University (WSU) and DL ADV-Tech have used 3D printing to develop a means of detecting exposure to the potentially-carcinogenic herbicide glyphosate.

Composed of a series of nanotubes coated with 3D printed sensors, the test kit uses similar tech to that found in diabetic glucose monitors, only it deploys currents to assess glyphosate levels instead. Given that the reaction caused by the team’s device is artificial not organic, they say that it’s low-cost and doesn’t require special storage, making it an ideal tool for measuring exposure to harmful chemicals.

“We started to develop this sensor for health monitoring, but it also can be used for food safety and environmental monitoring,” said Yuehe Lin, a study author and Professor at the WSU’s School of Mechanical and Materials Engineering. “We designed it to be portable and used 3D printing to make it small and compact, so that it can be used anywhere—in the lab or in the field.” 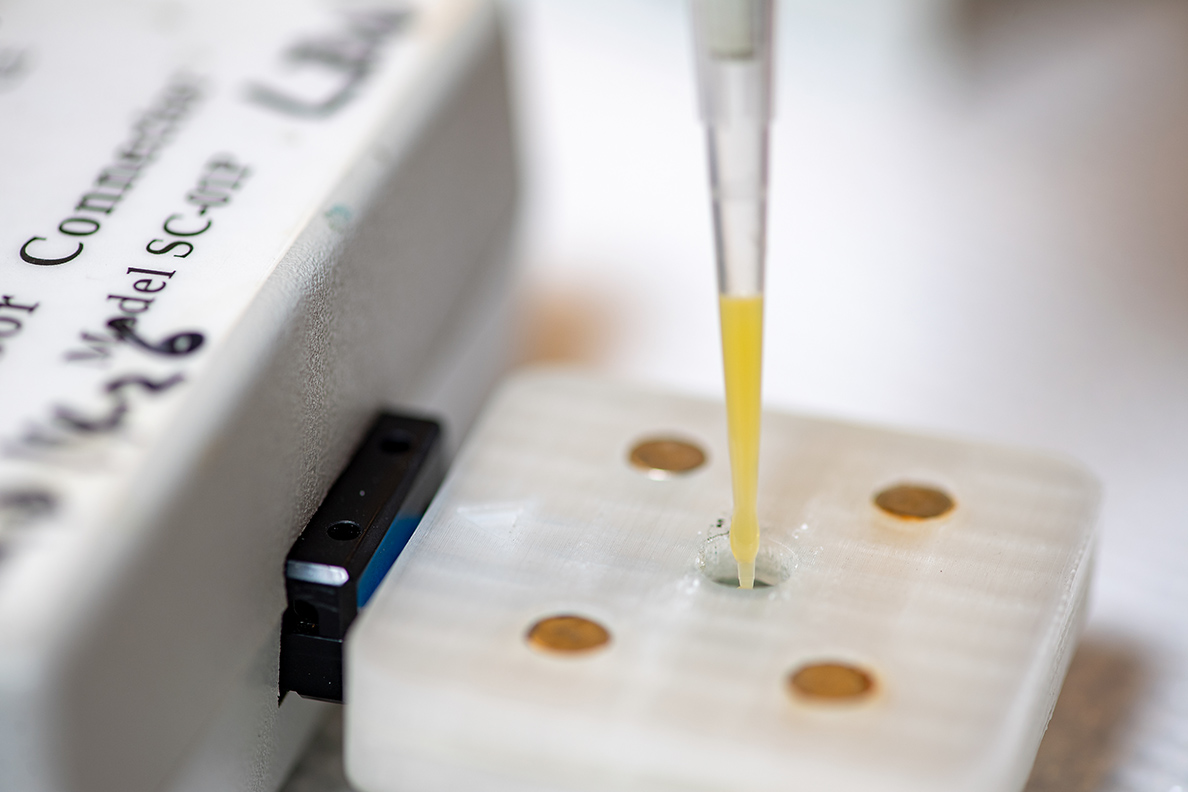 The engineers’ sensor is designed to detect herbicide traces in foods and drinks. Image via Washington State University.

Largely deployed to control the growth of weeds, glyphosate is a phosphonic acid herbicide that works by inhibiting plant growth enzymes, and it effectively kills any broadleaf species in its near proximity. Registered as a pesticide in the United States since 1974, the chemical is widely-used around the globe, but the U.S. Environmental Protection Agency (ECA) has also found that it damages its surroundings.

In fact, EPA studies have shown that glyphosate poses a potential risk to birds on land or in water, and that traces can be detected in certain foods, although it says this isn’t proven to cause harm. The agency maintains that as long as products comply with certain limits they’re safe for consumption, and contrary to widespread reports and rulings, it says glyphosate is “not likely to cause cancer in humans.”

However, while the EPA’s ruling is backed by the European Food Safety Authority and World Health Organization, the International Agency for Research on Cancer says the chemical is “probably carcinogenic to humans.” As a result, Vietnam, Germany and the Netherlands have all announced glyphosate-herbicide bans, with some countries phasing them out, and others prohibiting their private sale altogether. 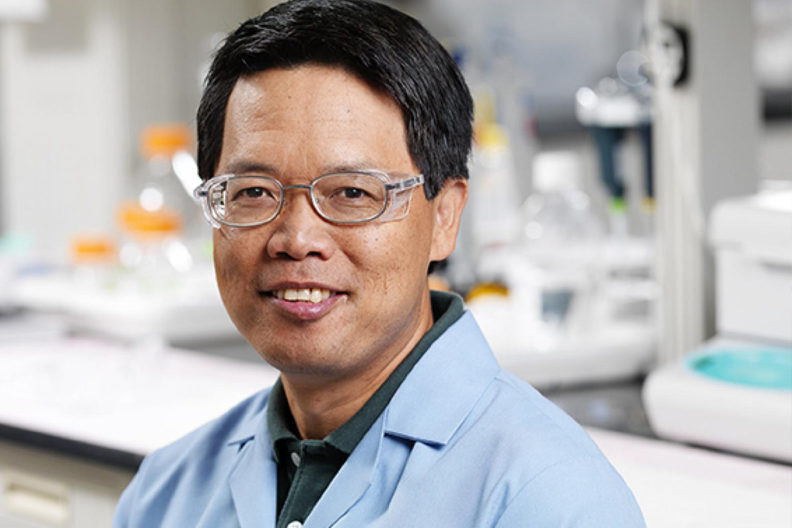 WSU Professor Yuehe Lin says that the sensor’s portability allows it to be deployed “anywhere.” Photo via Washington State University.

Given the potential risks associated with glyphosate exposure, the WSU team set out to measure its concentration within certain comestibles, as part of a National Institutes of Health-backed project. In particular, the engineers sought to develop a means of chemical testing that didn’t require the use of expensive spectrometers, or biological antibodies that need careful storage to prevent degradation.

To accomplish this, the researchers constructed a test kit composed of polymer nanotubes embedded with tiny holes, capable of binding glyphosate molecules in a way that mimics biological antibodies. In order to give these nano-structures sensing functionality, they were then covered in printed sensors that use electric currents to measure glyphosate, and ensure it stays at safe levels.

Putting their devices to the test, the engineers eventually exposed them to orange juice and rice dishes ‘spiked’ with glyphosate, to see how accurately they could detect the chemical’s quantity. To their delight, the team found their sensor had the ability to identify the herbicide with high sensitivity and specificity, thus in future, they intend to test it on human samples, to get to the bottom of glyphosate toxicity.

“For the next step, we want to use the sensor to detect glyphosate in some human samples such as blood, saliva or urine,” said Shichao Ding, a WSU doctoral candidate in Lin’s lab, and first author on the paper. “We will also continue to develop some new nanomaterials to enhance its sensing performance.” 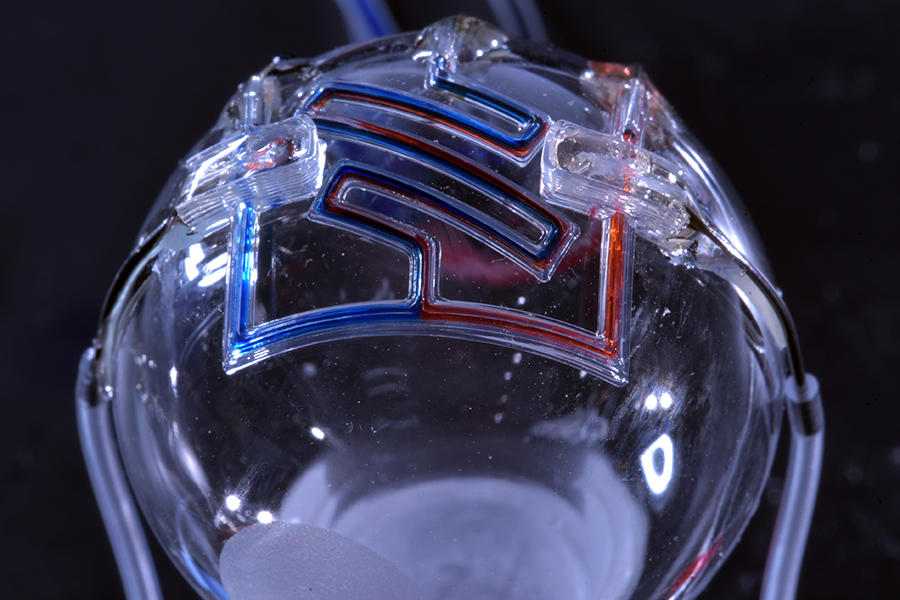 Over the last year or so, a significant amount of progress has been made in the R&D of 3D printed biological sensors, which allow users to detect and prevent certain health issues. At Clarkson University, scientists have 3D printed biosensors that can be applied directly to the skin, to alert wearers to potential sun overexposure.

Elsewhere in the U.S, researchers have adopted Optomec’s Aerosol Jet Printing (AJP) technology to produce graphene-based food toxicity sensors. The 3D printing-enhanced devices are said to be capable of detecting histamines (or allergens) and toxins in food much faster than standard laboratory tests allow.

In more experimental military applications, the CCDC Soldier Center is also in the process of developing biological soldier sensors, which could be capable of physiologically tracking troops. In practise, the detectors may be applied to make soldiers aware of situational threats as well, by detecting airborne hazards such as weaponized toxins or bacteria.