Researchers from Tianjin University, China, have 4D printed a self-propelling soft robot capable of roaming around on its own.

The tube-shaped robot is made of a material called a liquid crystal elastomer, and it self-assembles when in contact with heat. The device leverages cleverly programmed fold patterns to induce strain within its own body, which enables it to roll over like a log. As well as traversing flat surfaces, the 4D printed soft robot has been able to complete more challenging tasks such as climbing up a 20° incline and even dragging along a load up to 40x its own mass.

“Like an insect with antennae, the robot can surmount a small obstacle. But when the obstacle is too high, it will turn back,” says Wei Feng, a materials scientist at Tianjin University and senior author of the study. “The whole process is spontaneous without human interference or control.” 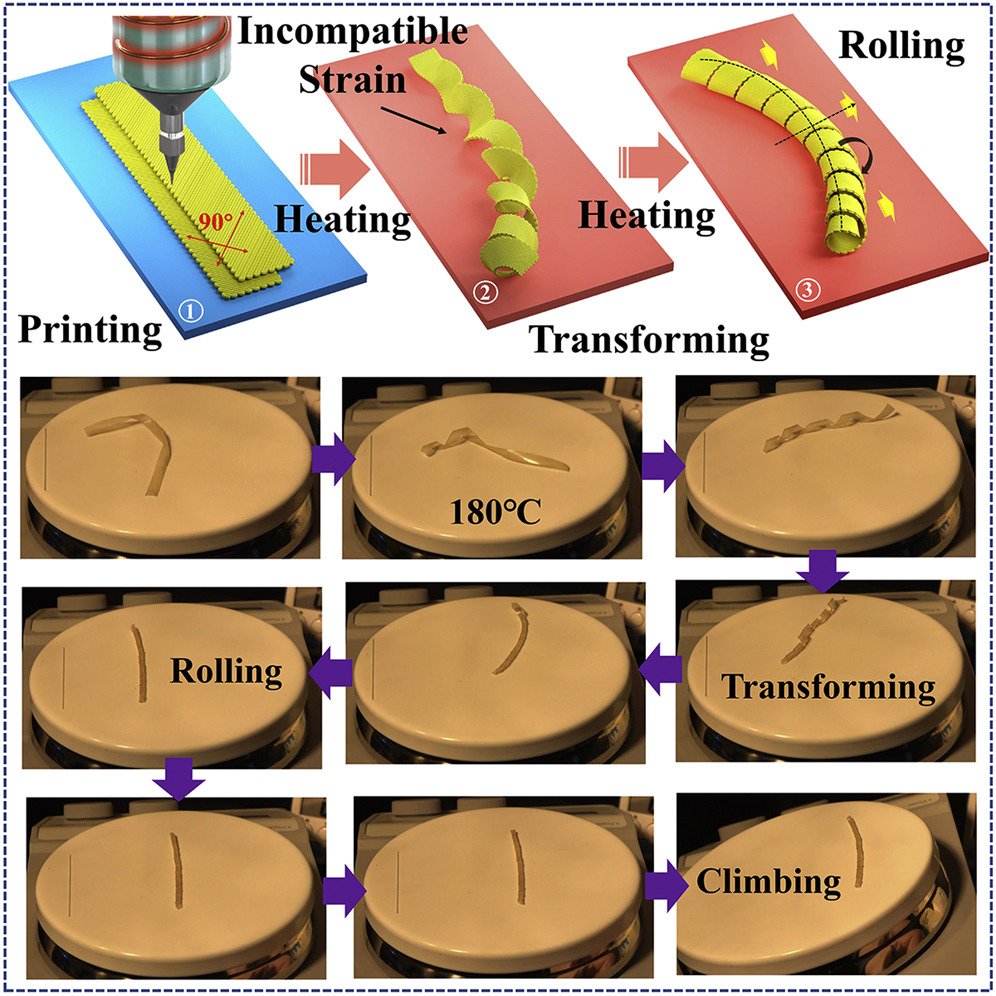 A liquid crystal elastomer is a type of flexible plastic material that can be made to contract when heated up. This makes it a great material class for reversible actuation applications like soft robotics, especially since they can be used to produce large work densities.

In the case of the Tianjin University soft robot, the researchers 3D printed a flat, rectangular sheet of liquid crystal elastomer and heated the surface beneath it up to 160°C and beyond. At this temperature, the heat from the surface below causes the robot to twist itself up to form a tubule shape that resembles a coiled spring. Further contact with the heated surface is what induces strain in the material, making it roll on its own via a wriggling motion.

The change in shape post-printing (induced by the heat) is what makes the device 4D printed, as the fourth dimension of time is added to the equation.

Once printed, the soft robot was put through its paces with a number of performance tests. The researchers found that it exhibited a very strong driving force, which allowed it to climb a 20° ramp and carry a load significantly heavier than itself. Eventually, the team 4D printed several robots and raced them against each other, finding that the length of a robot had a huge effect on its velocity. One of the longer robots, spanning 10cm long, managed to reach 48 cm/min on a flat surface.

“We processed the liquid crystal elastomers into samples of various shapes through 4D printing and stimulated these samples with light, heat, and electricity to observe their response,” Feng added. “We found many interesting driving phenomena besides deformation.”

As far as future applications go, the Tianjin researchers hope to see their soft robots performing work in confined spaces such as pipes or in extreme conditions above 200°C. Feng concludes, “We hope that soft robots will no longer be limited to simple actuators, which can only change shape in a fixed position.”

Further details of the study can be found in the paper titled ‘4D-printed untethered self-propelling soft robot with tactile perception: Rolling, racing, and exploring’.

The design freedom granted by 3D printing makes the technology an incredibly useful tool for novel applications like soft robotics. Earlier this year, researchers from Harvard University also used 3D printing to develop a school of soft robotic fish capable of swimming in complex patterns without the aid of Wi-Fi or GPS. Inspired by the distinctive reef-dwelling surgeonfish, the team’s ‘Bluebots’ feature four fins for precision navigation, and a system of LEDs and cameras that enable them to swarm without colliding.

Elsewhere, at Linköping University, Sweden, researchers have previously developed a set of microactuators for soft micro robotics using a custom-built extrusion-based 3D printer. The actuators contain an electrically-active polymer that changes shape after being printed in the presence of an electrical charge, granting them 4D capabilities.

Editor's Note: This article is originally appeared on 3dprintingindustry.com by Kubi Sertoglu