Researchers at the Chinese University of Hong Kong have developed a polymer-based 3D printing material that can be dissolved almost entirely on-demand.

Made up of plant leaves and plastic waste, the team’s ‘Planstic’ filament features high-entropy fibers, designed to attract natural enzymes that accelerate its rate of degradation once disposed of. After just 8 weeks’ soil decomposition, the scientists say their material completely degrades leaving very few microplastic particles behind, potentially making it an eco-friendly alternative to mainstream PETs.

“The main problem with biodegradable plastics is that plastic items marked ‘biodegradable’ can only be broken down into smaller pieces. This is not an improvement on traditional plastics,” say the team in their paper. “Planstic solves this problem by enzyme degradation, making the degradation reaction of microplastics take place more efficiently, thus accelerating their degradation.”

“PLANSTIC CAN REDUCE THE COSTS OF DEALING WITH SECONDARY POLLUTION, AND CAN BE USED GENERALLY IN DAILY LIFE TO SOLVE THE PLASTIC DEGRADATION PROBLEM WORLDWIDE.”

Despite their inherent versatility, cheapness and corrosion-resistance, it is well-documented that plastics can take thousands of years to degrade. This means that once polymer-based products are discarded, they become an enduring pollutant to the environment, and this is particularly problematic when they break down into the toxic microplastics that are increasingly entering the human diet.

While degradable plastic bags are becoming the norm at Western supermarkets, the Hong Kong-based scientists point out that these still cause secondary pollution, via the raw materials and high energy consumed in the process of making them.

Similarly, although disposable food-related packaging, cutlery and containers are often marked as being made from biodegradable plastics, in reality, they can only be broken down into smaller pieces. As a result, many such polymeric goods still contribute to a growing microplastic problem that, according to recent research, now leads the average American to eat 39,000-52,000 polymer particles per year. 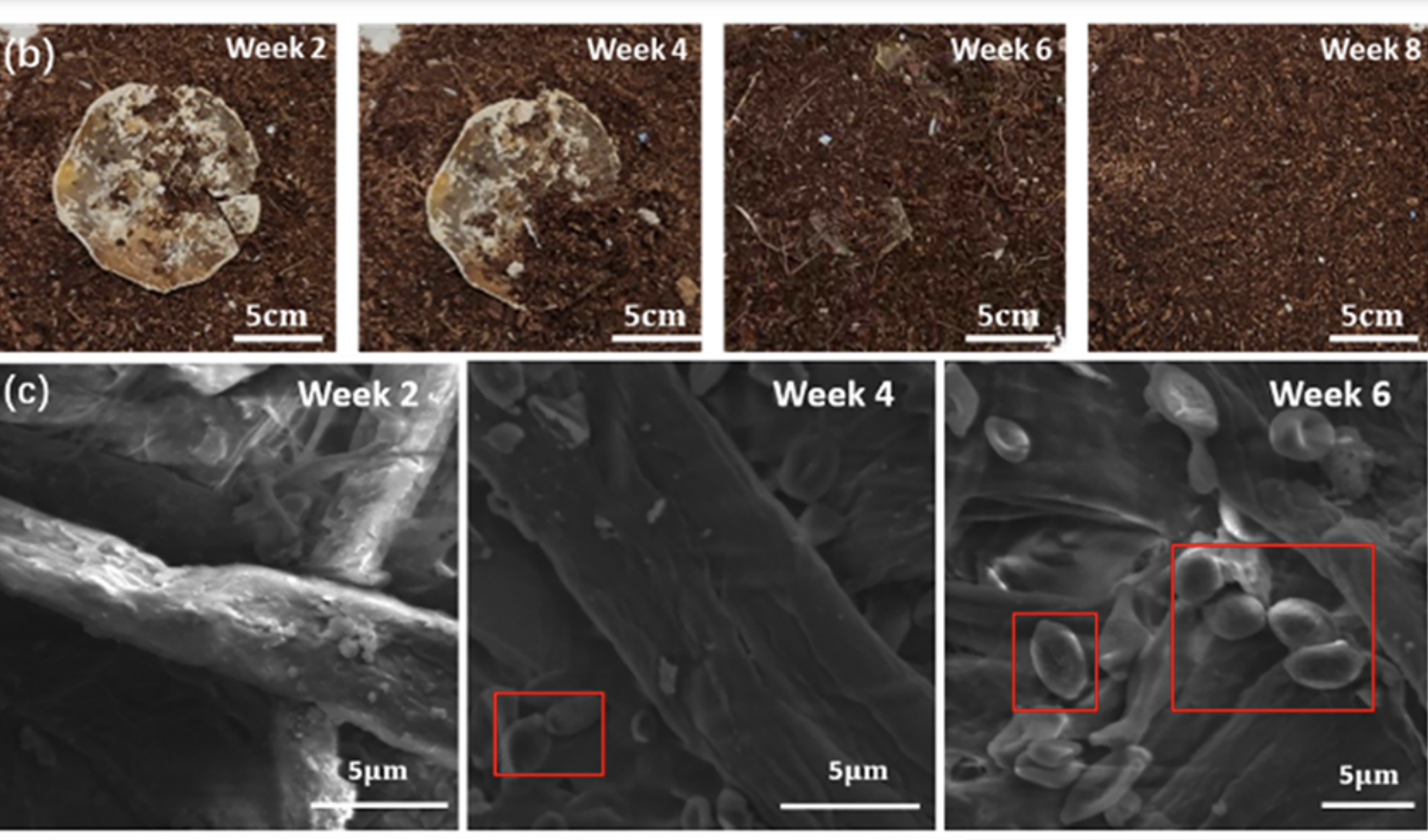 The Planstic filament being degraded over an eight-week period. Images via the ACS Applied Polymer Materials journal.

To help the world wean itself off its microplastic diet, the Hong Kong team has formulated a low-cost plant-infused plastic, that harnesses natural enzymes to degrade tiny polymer particles much more efficiently. Nicknamed Planstic, the researchers’ novel material was created via the combination of redbud leaves and ground PET, which were mixed, plasticized and made printable in a ‘Chembox.’

In the process of creating their material, the scientists found it possible to integrate leaves from the short-growth cycle Cercis chinensis, which naturally includes long fibers that lend themselves to degradation. The team also discovered that reinforcing these fibers at intersections improved the resulting filament’s properties, while each ingredient’s dosage could be optimized to minimize energy loss.

Once they’d finalized their material, deciding on a mix of 80% fibers and 20% PET, the researchers deposited it using a Nanoscribe Photonic Professional GT2 3D printer, into a series of microstructures. After SEM imaging had shown that it could be 3D printed into parts with fine features as small as 160 nm, Planstic then proved itself to be more flexible but less strong than normal plastic bags under stress testing.

In order to assess their filament’s biodegradability, the team later deposited it into composted soil, finding that the enzymes within its leaf base decomposed “hard-to-degrade substances” like cutin. Interestingly, the material’s less stable surface also improved decomposition rates, as it allowed microorganisms to contact with it and accelerate the process, helping achieve “nearly total plastic degradation.”

Following the success of initial trials, the researchers say their Planstic material proves that “attracting microbials” can “accelerate plastic degradation.” Moving forwards, the team suggest that such closed-loop recycling methods could even replace landfill or incineration disposal methods, “reducing the energy pressure of nanotechnology and [helping] build an environmentally-friendly society.” 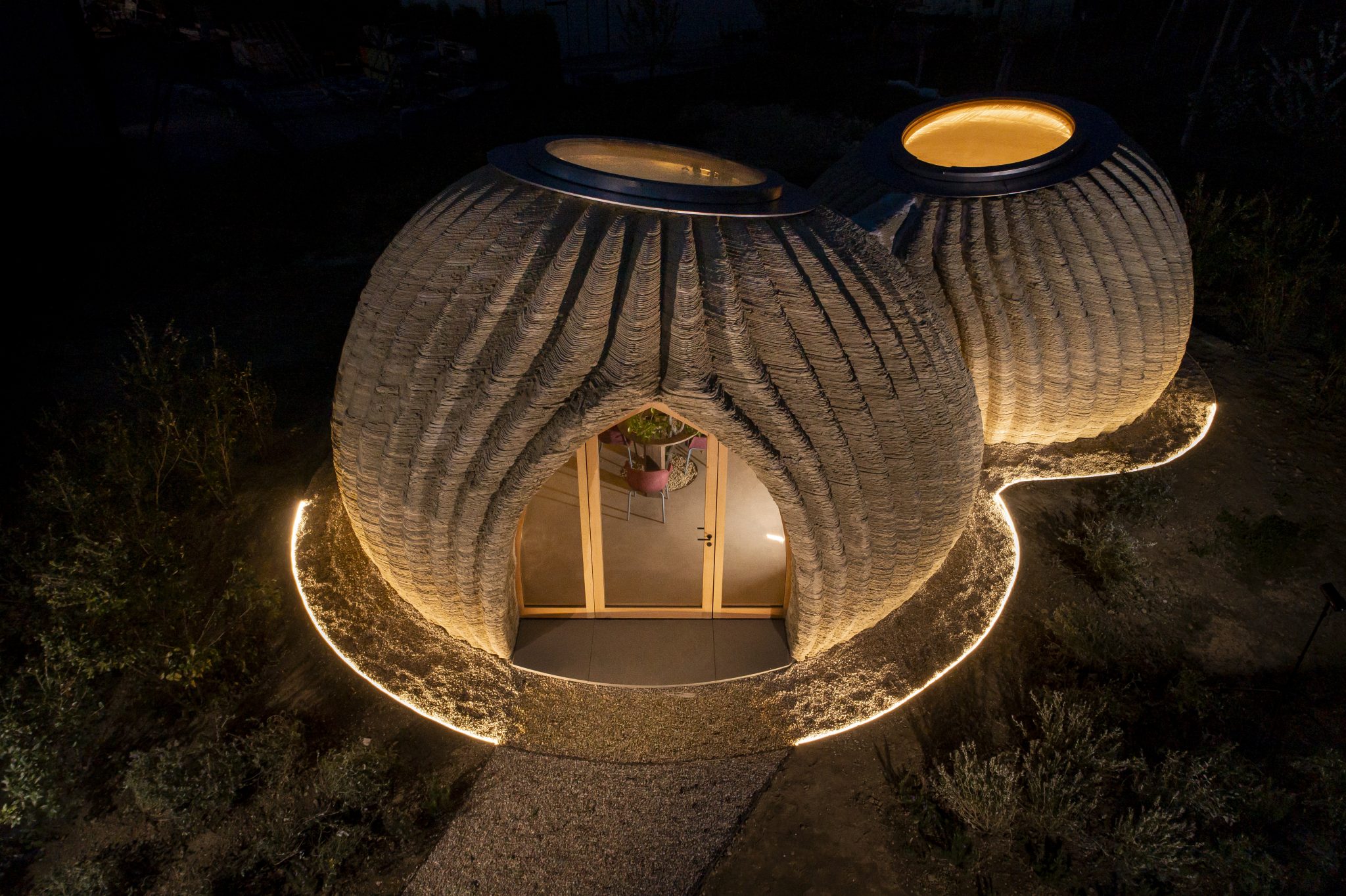 Given that many 3D printing polymers are as much part of the world’s microplastic problem as any other plastic, researchers continue to develop bio-alternatives that incorporate various natural elements, ranging from soil to insect faeces.

Scientists at the Massachusetts Institute of Technology (MIT) have turned to lab-grown wood cells as a means of producing a sustainable 3D printable biomaterial of their own. By cultivating their material, in a method akin to culturing meat, the team believe that it could be turned into a wood replacement with the potential to be 3D printed into home-made furniture.

On a commercial level, Desktop Metal has also begun binder jetting wooden parts via its Forust wood 3D printing subsidiary. The company is now upscaling waste byproducts from the wood manufacturing and paper industries such as sawdust and lignin, before mixing these with a bio-epoxy resin for architectural additive manufacturing applications.

Elsewhere, in the construction industry, WASP has utilized natural materials such as soil, rice, husk and lime to 3D print an entire eco-friendly organic house. Finished earlier this year, the self-supporting carbon-neutral ‘TECLA’ home, is designed to act as a proof-of-concept for a sustainable new house building model.