Using a mixture of mechanical grinding and pyrolysis, the team have been able to recycle a now-defunct wind turbine blade into a fine fiber powder. During summary testing, the blade’s remnants not only showed higher strength and stiffness than virgin fiberglass, but once integrated with PLA, they proved capable of yielding robust fiber-reinforced 3D printed parts.

“We propose a procedure to incorporate recycled glass fibers from end-of-life wind turbine blades into pure thermoplastic FDM materials,” said the team in their paper. “Our recycling system is expected to reuse a huge amount of turbine blade waste, leading to a major reduction in the landfill of dangerous and harmful blade materials.”

“The incorporation of recovered glass fibers in filaments will increase the reliability and strength of the components produced, thereby resulting in a broader application of FDM 3D printing.” 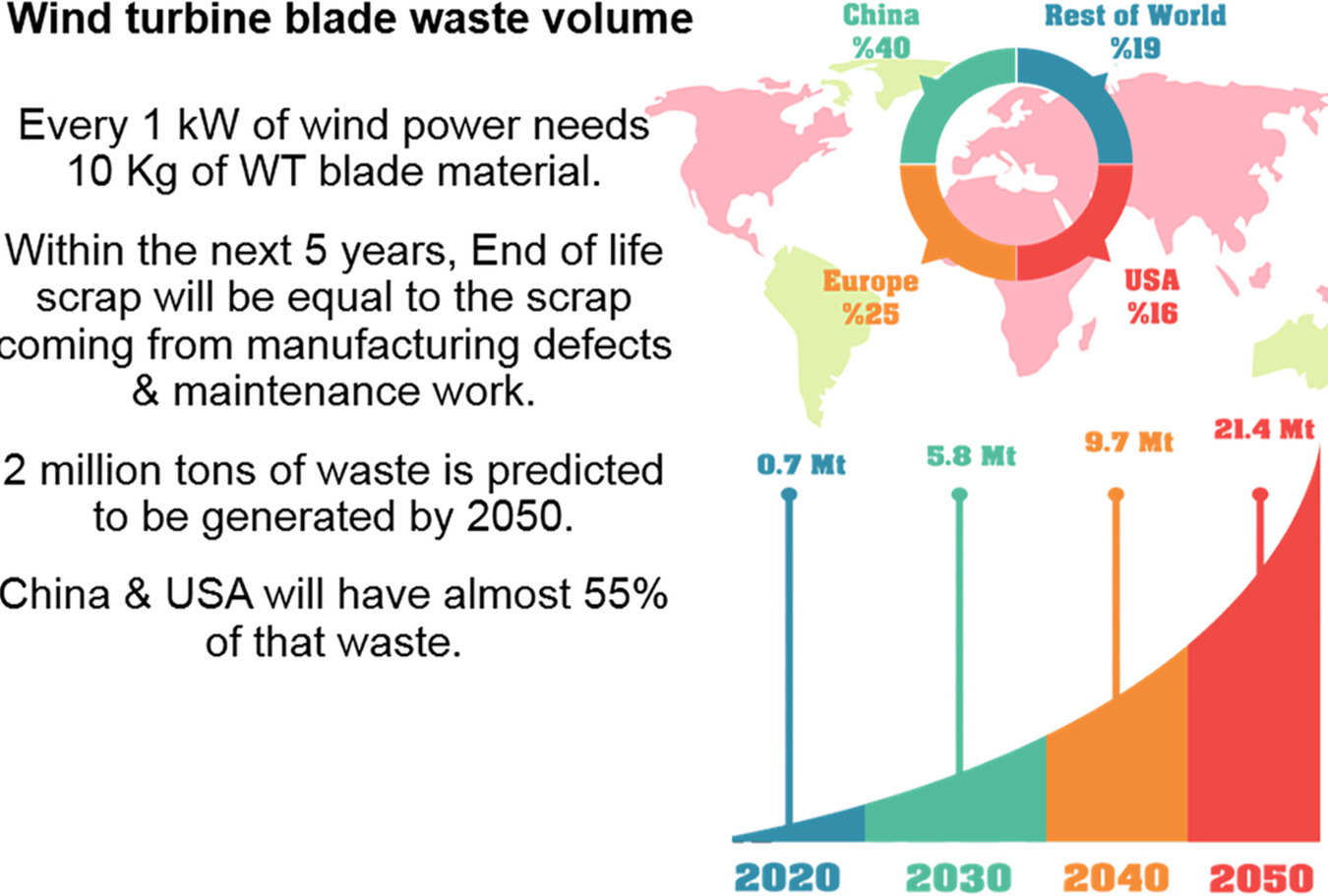 The researchers’ estimates for turbine waste growth over the next thirty years. Image via the Polymer Composites journal.

Generally, the high strength and stiffness-to-weight ratio of composites makes them ideal for producing low-carbon footprint aerospace, military and automotive parts. This is also the case within the wind energy sector, where glass fiber is often deployed to reinforce composite-based turbine blades, which turn natural wind-generated kinetic energy into an eco-friendly source of electrical power.

However, despite the clear eco-benefits of using wind rather than fossil fuels to generate energy, it’s less well-known that end-of-life turbine blades tend to be disposed of via landfill or incineration. Given that such blades are packed with inorganic ingredients, landfilling them can lead to the release of harmful gasses, while burning them is less detrimental to mother Earth, but also yields vast quantities of ash.

In the past, researchers have investigated mechanical, thermal and chemical strategies for recycling turbine blade waste, but none have proven viable thus far. Of these techniques, mechanical approaches are considered the most mature, but they often yield unstably-bonded fibers, while pyrolysis tends to result in charring and chemical-based methods have become difficult to scale.

Despite the issues that continue to inhibit the usability of recycled fibers, the Canadian team anticipates that turbine technology’s advances over the next 30 years will result in significant waste, and with blades continuing to be built unsustainably, they say that a new design practice is needed to turn reused materials into a valid commercial opportunity. 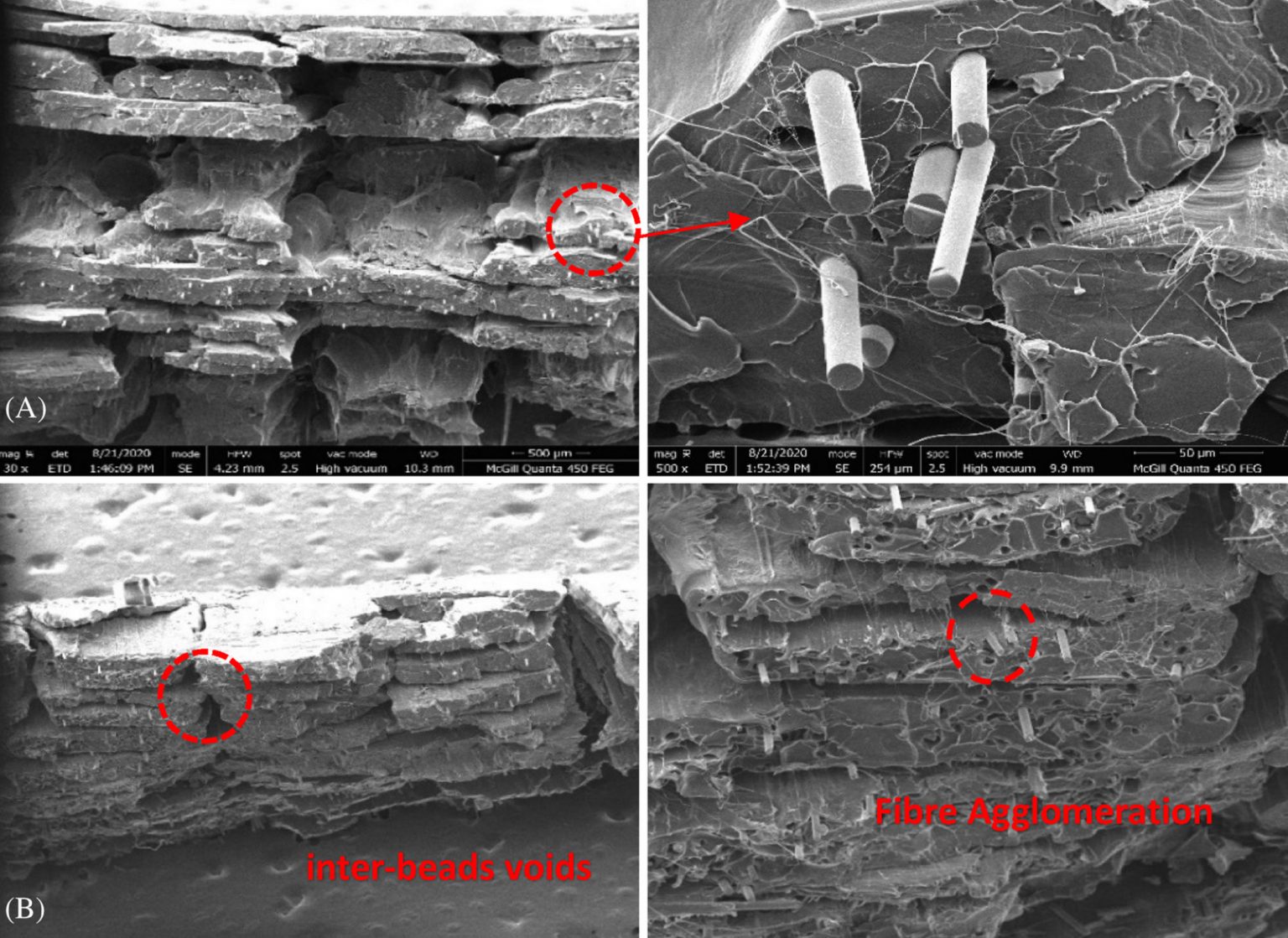 SEM images from the fractured surface of the team’s pyrolyzed reinforced test specimen. Image via the Polymer Composites journal.

According to the researchers, the best way to improve both the business case and printability of recycled turbine parts is to integrate any resulting fibers with PLA filaments, for use with ever-popular FDM machines. To test their hypothesis, the team cut sections from a larger blade, before feeding them into a hammer mill grinder, which broke them into a resin powder.

Once sieved, the blade particles were mixed with molten PLA pellets at concentrations of 5-10% and extruded twice, yielding a 1.75 mm-diameter filament. In order to assess the performance of their material, the researchers then 3D printed it into ten samples with a Prusa i3Mk2S system, doing the same with pyrolyzed fibers and conventional PLA as well.

Interestingly, the team’s analysis showed that their new material exhibited higher tensile strength than the pyrolyzed one, but the reverse could be said for stiffness, where the latter saw a rise of up to 70%. Both filaments also outperformed virgin feedstock in these areas, yet compared to ordinary PLA, the 10%-reinforced samples featured dramatically reduced ductility and strength. The team concluded that their samples had demonstrated comparatively high fragility due to their short fiber length, and that with further research, it could be possible to produce longer-fibered materials capable of “obtaining the tensile properties of reinforced 3D printed specimens,” and addressing the wider flaw in wind energy’s eco-friendly credentials.

“Both recycled fibers, that is, ground and pyrolyzed, exhibited higher strength and stiffness values compared to virgin fibers,” concluded the team in their paper. “This indicates that reusing recycled fiberglass from end-of-life wind turbine blades is not only an environmentally-encouraging solution, but also a competitor to FDM 3D printing feedstock reinforced by virgin glass fibers.”

On the opposite end of the scale, rather than recycling turbine parts, 3D printing is now increasingly being used to create optimized blades and wind energy components. Earlier this month, Optomec was awarded $500,000 by the US Air Force Sustainment Center to develop 3D printing parameters for repairing F-15 and F-16 jet engine turbine blades.

In a similar vein, Siemens Energy has developed a novel digital repair chain for 3D printing directly onto conventionally-manufactured gas turbine blades. Rather than using DED-based 3D printing, the company devised a unique LPBF process for the project, which enables various upgrades to be added onto blade tips as required.

With regards to wind energy specifically, GE Research has been awarded a project by the US Department of Energy (DoE) to explore the design of 3D printed wind turbine blades. During the program, the firm intends to work with several industry leaders to develop blade tips that are both cheaper and more readily available than standard spare parts.

The researchers’ findings are detailed in their paper titled “Experimental and analytical investigation of 3D printed specimens reinforced by different forms of recyclates from wind turbine waste.” The study was co-authored by Mazin Tahir, Amirmohammad Rahimizadeh, Jordan Kalman, Kazem Fayazbakhsh and Larry Lessard.