One of the fundamental parts of our 3D printer is definitely the nozzle where you have the fusion of the material that is printed. This component is subject to very high temperatures and filaments of various kinds. This involves a great wear and tear that compromises the quality of our prints. So it is important to know the various materials of which it is made and choose the most suitable for our need. In addition to the material there are other factors that constitute a nozzle such as its extrusion diameter and others that we will skip.Before starting let’s see which scientific instruments can be useful to understand the various materials. We will see only some of the most useful ones.

Mohs scale is a qualitative ordinal scale characterizing scratch resistance of various minerals through the ability of harder material to scratch softer material.

There are several ways to conduct the measurement that consist of penetrating an object into the material and evaluating its deformation. You might wonder what this has to do with nozzles. When we print the nozzle is crossed by a filament that scratches its internal surface; therefore, the greater the Mohs hardness of the object, the greater the resistance of the nozzle. As a result, it allows to maintain the same extruded dimension without widening.

Thermal conductivity describes the transport of heat through a body that results a change in temperature. It refers with the unit of measurement watt per metre-kelvin or λ. It is calculated through an equation and we will use it in the analysis to understand if a material conducts heat or becomes an insulator so it blocks its passage. So for obvious reasons it allows you to heat more quickly and keep the temperature of the nozzle more consistently. 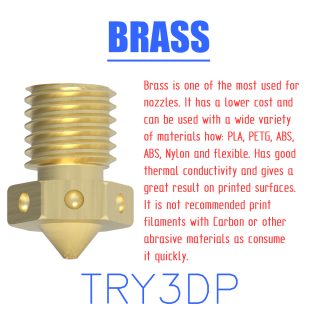 Steel is a ferrous alloy composed of iron and carbon. To be defined as steel the value of carbonium cannot exceed 2% otherwise we are talking about cast iron. In the case of stainless steel, the carbon content is low about 1.2% but also has chrome in the alloy which allows the metal not to oxidize. To obtain greater resistance to high temperatures, nickel is also added. It has a low thermal conductivity (about 17 W/m*K) which is not good for good printing. In contrast to brass it has a good hardness of 5.0 Mohs which allows to print abrasive filaments without big problems. The thermal expansion coefficient 6×10-6 K-1 is also good. It is not very common because it is mainly used for food and pharmaceutical uses, in particular there are some regulations that allow its use. For that reason, not all stainless steel can be used for this purpose. 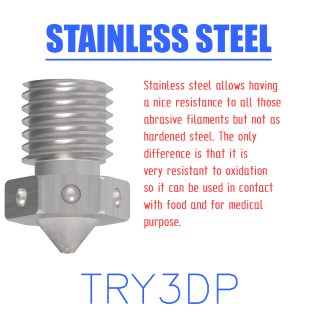 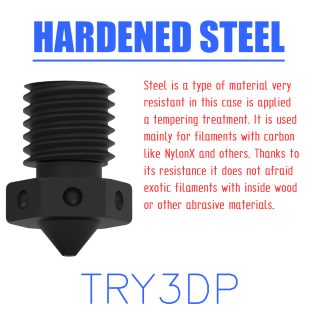 Let’s now pass to hardened steel. Here a hardening treatment is applied. It consists of rapid cooling of the material after bringing it to high temperature. Giving it a hardness of 7.8 Mohs which makes it very resistant to all types of abrasive filaments including those with metal powders. It allows it to reach high temperatures, in the order of 450 °C. We can print many materials including PEEK and PEI. The thermal conductivity (about 23 W/m*K) is slightly higher than that of stainless steel. This causes the same problems. It is recommended to raise the temperature a few degrees higher than that recommended by the filament manufacturer. Good thermal expansion coefficient 8×10-6 K-1.

Let’s go now to copper a material that has a high thermal conductivity (about 390 W/m*K) but it oxidizes easily in air. Coating it with nickel does not oxidize and makes it difficult for the extruded material to adhere to the nozzle. On the other hand, it reduces the thermal conductivity to a value of 330 W/m*K, however high. Copper has many cons of brass like the same hardness and difficulty of processing at the machine tools. Good coefficient of thermal expansion 8×10-6 K-1. For this features it can print at high temperatures, about 500 °C. It has a low hardness 3.0 Mohs that does not allow to print abrasive filaments.
Manufacturer’s website : https://e3d-online.com/products/v6-nozzles . 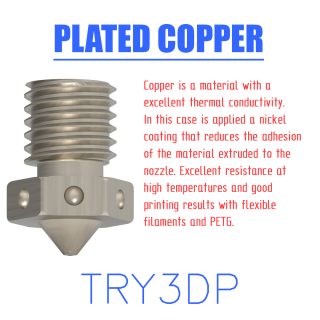 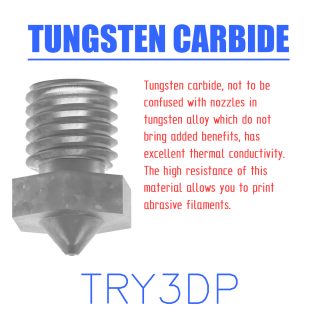 We’ve all been hearing too much about the tungsten carbide that is made by reacting tungsten and graphiteat very high temperatures. It has a good thermal conductivity equal to that of brass but unlike the latter has a hardness of 9 Mohs. This makes it suitable for printing any material. Very low coefficient of thermal expansion of 17×10-6 K-1. So it can be brought to very high temperatures without deformation allowing the use of filaments that require high temperatures. Among the cons, has problems of oxidation in contact with air that increases with rising temperature. Thanks to a nickel plating, the problem is easily overcome. Its scarce use is given by the cost of production and processing. Except for this, it would be one of the best materials for a nozzle, superior even to the ruby that we will see now. Manufacturer’s website: https://dyzedesign.com/shop/nozzles/tungsten-carbide-nozzle/ .

Ruby nozzles consist of a nickel-plated brass or copper body. It has the same hardness, the same coefficient of thermal expansion and the same printable materials as tungsten carbide. The thermal conductivity is about half less than the latter, due to the presence of ruby. The situation improves slightly in those made with copper body. Manufacturer’s website: https://olssonruby.com/the-olsson-ruby . 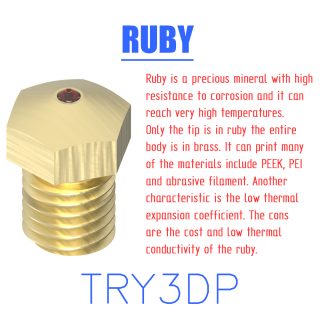 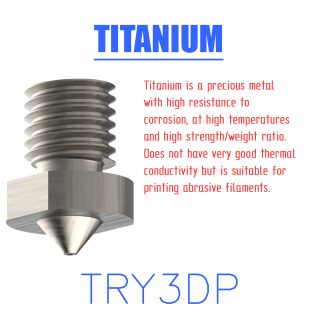 Titanium is a metal that is not widely used in nozzles. It has a hardness of 6.0 Mohs which increases to 9.0 if we take its carbide so it is suitable for printing all abrasive filaments. The thermal conductivity (about 21.9 W/m*K) is just below than that of hardened steel, so a low value that leads to the same conclusions. Coefficient of thermal expansion of 8.6×10 -6 K-1 is relatively low. From the data reported titanium isn’t particularly beneficial compared to other nozzles but has an excellent resistance at high temperatures. Manufacturer’s website: http://eim3d.com/venus .

Thanks to charts we can summarize and understand which is the most suitable nozzle for our use. We can see how the best is the tungsten carbide, thanks to its hardness, low coefficient of thermal expansion and good thermal conductivity. Its problem is high cost and low diffusion.At a lower cost we have copper carbide which has a high thermal conductivity or hardened steel which offers a high resistance to abrasive filaments.

I’m not here to determine a winner, each has its pros and cons,I hope that you are now provided with some useful tools to analyze most of the nozzle materials. The two upper charts give a further clarification to the comparison. I want to clarify that the data entered are from Wikipedia, Fondamenti di metallurgia and Tungsten carbide oxidation. In conclusion, as already pointed out, the data reported vary depending on the processing of the material and other characteristics; therefore it is good to consider these results generally as reference points.