Researchers at the University of Maryland (UMD) have designed a ‘morphing’ nozzle that enables users to 3D print customized parts with fiber-filled composites. Unlike conventional printheads, the team’s device features novel side actuators that allow it to change shape during printing, and effectively re-orientate a material’s fibers. Using their new nozzle, the scientists were able to tweak the swelling qualities of complex objects, potentially lending it biomedical or military applications. “When 3D printing with our morphing nozzle, the power lies in its side actuators, which can be inflated like a balloon,” explained Ryan Sochol, an assistant professor of mechanical engineering at UMD. “This changes the shape of the nozzle, and in turn, the orientations of the fibers.” 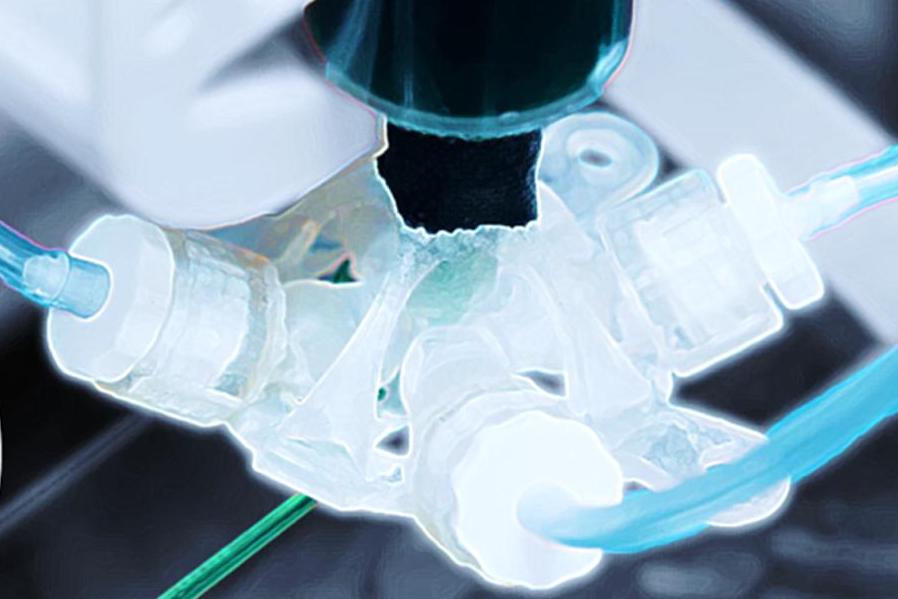 Extrusion systems are compatible with a wide range of materials, and harnessing this flexibility, researchers are increasingly seeking to fabricate embedded fiber parts. By adjusting the direction of these compounds’ threads, it’s possible to create objects with enhanced properties, but such approaches do have drawbacks.

One challenge to 3D printing fiber-laden composites is that ordinary extrusion nozzles only allow for identical fiber alignment during deposition, which restricts any orientation control. As a result, within 4D printing, users need to manually model the head’s deposition path to ensure that they produce an optimized part.

In order to enable greater control over fiber orientation, a number of researchers have developed upgraded nozzles that use externally applied fields to control spatial distribution. However, such magnetic methods tend not to yield complex parts or be compatible with many materials, which has limited their adoption.

More recently, scientists have developed ‘Rotational DIW’ (RDIW) processes, in which the printhead rotates, allowing users to align fibers as desired. Although RDIW is often used within aerospace, it’s seldom deployed during 3D printing, hence the UMD team set about designing an RDIW device that’s specifically optimized for AM. 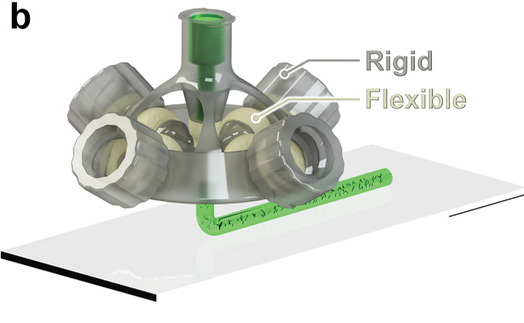 Using polyjet 3D printing, the UMD team were able to integrate both rigid and pliable materials into a single device. Image via the Advanced Materials Technologies journal.

Using a Stratasys Objet500 3D printer, the researchers were able to create their new nozzle out of multiple materials, without compromising its integrity. For instance, the design itself features both rigid ports for adapter compatibility, and soft inflatable side actuators that enable the direction of fibers to be changed during printing.

To demonstrate the capabilities of their device, the UMD team attempted to customize the 4D printing process, though which it’s possible to create parts that reshape depending on their environment. Specifically, the scientists sought to use their nozzle to adjust the swelling properties of objects once submerged in water.

Normally, multiple materials are needed to achieve such anisotropic expansion, but using their enhanced nozzle, the UMD team were able to control these behaviors within a single composite. “What was exciting was discovering that we could cause a single printed material to transition between anisotropic and isotropic swelling,” said lead author Connor Armstrong.

“Importantly, the nozzle’s ability to morph and to even up the score in terms of swelling properties is not limited to 4D printing,” added Noah Todd, a study co-author. “Our approach could be applied for 3D printing many other composite materials to customize their elastic, thermal, magnetic or electrical properties.”

In future, the scientists believe their approach could also be applied within other printing processes, to fabricate biomedical products, capable of expanding on-demand. The advanced nozzle has potential military applications too, and the team are working with Department of Defense labs to explore this area of research.

Many of the industry’s most-used 3D printing techniques rely on the efficiency of their nozzle design to deliver peak production output, and parts with optimized properties. As a result, researchers continue to develop new ways of upgrading printheads, as well as adding functionalities for their end-users.

Scientists from ETH Zurich have designed a computational DfAM framework capable of automating the design of multi-flow nozzles. Acting as an alternative to CAD software, the framework allows non-specialist users to design the geometries of FDM nozzles.

Elsewhere, Spanish researchers have developed a novel ultrafast nozzle-based 3D printing technique. Using electrostatic jet deflection technology, the team were able to stack nanofibers on top of each other to create objects with submicrometer-level features.

Similarly, a team based at Harvard University have created a unique multi-material multi-nozzle 3D printing process. The ‘MM3D’ technique is designed to enable the fabrication of functional objects within a single process, rather than relying on multi-part assembly.